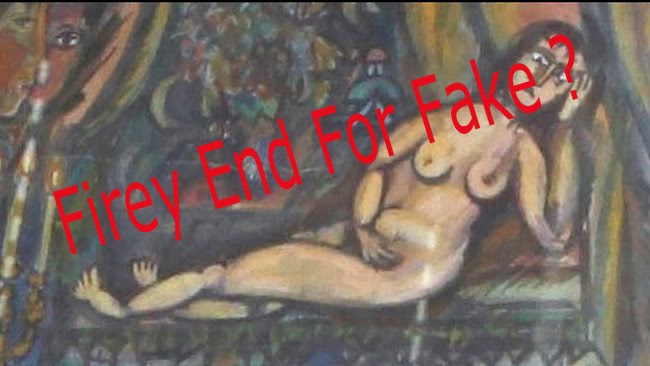 I’ve been following the outcome of the most recent episode of the wonderfully entertaining BBC’s Fake or Fortune with real interest. The ‘Fake’ in question is a Chagall brought for £100,000.  The F2F created a compelling combination of science and speculation good enough to present to the Chagall evaluation committee. That was then the trouble started.

The Committee decided it was a fake so they could exercise their moral right , under French Law,  to burn the painting !

This fiery fate for fakes is astonishingly the norm for those paintings ruled as forgeries by these French evaluation committees.

I very much agree with what the Daily Telegraph article on the saga  "the process of authentication owes rather more to consensus than to science". To my mind, what is art is what the consensus say. This might not be an actual Chagall but it is art that struck an aesthetic chord with a number of people - a consensus which  included some very informed people. To destroy the work is an act of vandalism. To sell it as a Chagall is a crime. I agree with the owner that the painting should be returned to its owner with the reverse permanently stamped FORGERY.

As I write Thur Feb 6th the case is not over yet the suspicion is that the Chagall committee is waiting for the fuss to die down then they’ll quietly destroy it. Hopefully the committee will see sense and stop this act of vandalism, for the latest check out ArtHistoryNews.