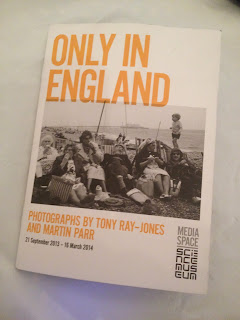 It was an entry in the wonderfully enigmatic and polemic quarterly Art magazine Jackdaw where I came across the work of Tony Ray Jones a British photographer who died all too young aged 31 back in 1972. His work is being shown at the ONLY IN ENGLAND exhibition at the Science Musuem's new Media Space.

He took the US documentary photography found in Walker Evans and more recently in the rediscovered Vivian Maier and gives it a very British look and feel. Where those US photographers used the streets and bars and to lesser extent their countryside Tony Ray Jones use the beach and the countryside to capture the British zeitgeist.

My two favourites from the exhibition which demonstrated British eccentricity and idiosyncracity at home on the beach and the countryside are:  Brighton Beach 1966 (I've been in similar seaside family pictures) and Glyndebourne, 1967 (a scene I 'm  sure you can see today!)
From a page on show from his  c1965 notebook  you can find tips and ideas which resonate today in our digital photography  age. I found stay with the subject matter (be patient) and get involved (talk to people) particularly relevant to me. 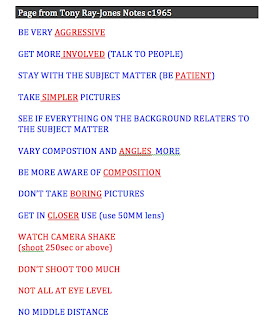 And yes, I did look for the Blacks and they were there both fictive aka in the blackened white faces style of the Black & White Minstrels, in the oddly named Bacup Coconut Dancers who seemed to be related to the equally odd Morris Dancer and yes both groups have there history 'lost in the mists of time' . There were of course some real blacks caught in the streets of Tony Ray Jones's London in 60's and 70's
A good exhibition very intsrtuctive - recommended!

PS while doing the research for this post I came across the blog post of Blake Andrews in which he talks about rephotography, I have been meaning to do similar with a Jimi Hendrix picture....watch this blog