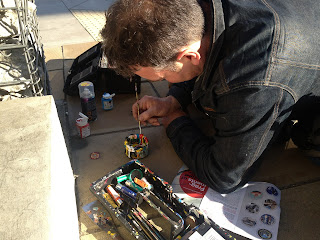 Prior to meeting  Ben Wilson theChewing Gum artist I would have been sceptical as to his artistic credentials - having spent sometime down on the pavement with Ben I'm a convert. Apart from being a very genuine and sincere bloke his work is engaging and fun as well as being  not without purpose as they are often site specific or dedicated. 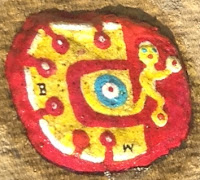 I met Ben on Garry Hunter's current, innovative excursion into curation - Fragments of Isolated Faculty. It's an art walk come geo caching trail in  Trinity Bouy Wharf and its surroundings.  The Chewing Gum Trail by Ben Wilson was on the pavements adjacent to East India DLR as one of the objects on Garry's trial, which ranged from Andrew Baldwin's, seemingly steampunk inspired, Fish Bike Sculpture, actually on the Wharf, to the enigmatic Electric Soup Mural by Bruce Mahalski in the near by Orchard Place. 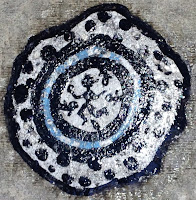 It was, as I was walking back to take the DLR home. that I discovered Ben prostrate working on piece of gum shown above. I couldn't resist the opportunity to confront Ben only to discover a really pleasant, chatty and engaging artist committed to his work and life style. We had a very pleasant chat for a good 40 mins. Our chat revealed him to be a family man , how he'd suffered for his art at the hands of Royal Academy Security Guards ,we had common interest in one Englands greatest artist - Stanley Spencer and Anish Kapoor was a fan. All in all a rounded individual who had found his life's purpose. Some other random discussion points: he's  been doing this work for eight and half years; he records and photographs each work; he sees restoration of his work important. 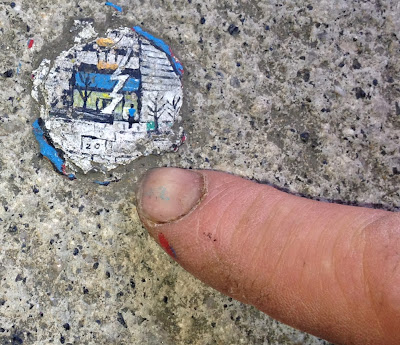 I was particularly impressed when he found an old work which he immediately set  about renovating from its decayed state  to a pristine lovely newness complete with its date. It was a site specific work a mini reproduction of a lone figure approaching  the lightening bolt sculpture infront of the building behind the work, painted in winter when the foreground tree was without its leaves, showing just how much detail Ben can cram into such a small space. 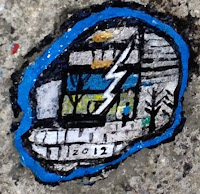 I look forward to coming across more of Ben's eccentric, witty and revealing work while encouraging you to keep your eyes down and open to find his work, there are over 8,000 pieces out there so you could get lucky!
Posted by Michael at 00:04