I wasn’t a great fan of Lorenzo Lotto (1480-1557), I much preferred his much better known and much celebrated contemporaries: Raphael (1483-1520), Titian (1488-1576) and of course Michelangelo (1475-1564) my all-time favourite artist. So, when I went to see the National Gallery’s Lorenzo Lotto Portraits exhibition which brings together Lotto’s portraits spanning his entire career, I wasn’t expecting much. I could not have been more wrong.

I found Lorenzo Lotto Portraits a profoundly moving, learning and exciting  experience; I was deeply moved by the quality of Lotto’s portraiture, I learned something very new to me about the framing of paintings from the period, and was really excited to see another innovatively curated exhibition from the brilliant Matthias Wivel the National’s curator of its 16th century Italian paintings.

Twenty-eight of Lotto’s portraits are presented in chronological over four rooms of the National’s ground floor gallery space. Room one explores Lotto’s work from his time in Treviso (1503-06), room two has his portraits from Bergamo (1513-49), room three those from his time in Venice (1525-49) and finally room 4 is dedicated to his late works.

Each of Lotto’s portrait has a personality I’d never noticed in his work before, in contrast to his contemporaries Lotto was painting the person not the position. Portraits by Titian and Veronese were monumental, designed to show the status and gravitas of the sitter. Lotto on the other hand seems to reach into the person’s soul capturing their humanity.

Quoting Bernard Berenson the art historian, who in 1895 wrote in the first monograph on Lotto: [he] was the first Italian painter who was sensitive to the varying status of the human soul. Never before or since has anyone brought out on the face more of the inner life….

I would not go so far, I would look to Leonardo for that crown and later there’s Velasquez, Rembrandt and others. I would however agree with Matthias more measured consideration of Lotto’s portraits, to him they ‘feel more direct, less filtered, than those of his contemporaries notably Titian’s more elevated idealised portraiture…..there is sense of understating what makes each sitter tick’

I was particularly struck by one of his late works Portrait of an elderly gentleman with gloves (Liberale da Pinedale). Which Matthias pointed out had some of the profound soul-searching depth to be seen in Rembrandt’s portraits. The sitter’s direct steady, contemplative gaze spoke to me putting me mind not just of Rembrandt’s late self-portraits but also penetrating, autobiographical portraits deep in old age by Picasso and Stanley Spencer.


The curation is wonderfully innovative as it included objects that relate to or are to be found in the portraits on display, making connections outside the frame, really bringing the portraits to life.

Lorenzo Lotto Portraits similarly has objects on display beside the pictures they are depicted in, notably the famous likeness of the Venetian collector Andrea Odoni from the Royal Collection. It has several of the objects Lotto surrounds Odoni with in his portrait.

The actual sculptures as seen in the painting including the headless Venus, a much admired piece from the collection of a Paduan humanist who owned the original is on display as well as the bust of Hadrian, not the plaster cast owned by Odini, the one of display is the actual original  owned by Cardinal Domenico Grimani, one of the great Venetian  collectors of antiquities at the time, all adding interest to  Lotto’s portrait of Odoni.

The objects supporting the portrait of Bishop Bernado de’Rossi in room one introduced me to a completely new view of Renaissance portraiture – the portrait as an active, intimate object.  Its label explained that unlike figures of authority personal, family portraits were kept under lock and key making viewing a much more active experience. 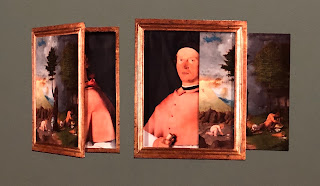 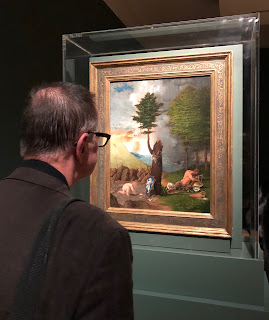 Bishop Bernado de’Rossi portrait would originally have had a cover as shown in the picture above. The frame and its cover seemed to have been separated, miraculously  the cover survives and was on show. Its cover was an allegory of the life of de’Roissi and included his crest.

There is another example of the picture cover in Bishop Thomas Nigris portrait in room 3 which remarkably is still in its original frame. From its frame we can see that it too once had a cover now sadly lost.

I came away really impressed by the range and quality of Lotto’s portraits and the concept of portrait covers was a revelation to me. Matthias Wivel’s curation is excellent, really bringing Lotto’s portraits  to life, enhancing the viewing experience. I recommend anyone interested in Renaissance art then there is something here for you in Lorenzo Lotto Portraits and it’s free!  #Recommended