Patrice Warrener's Light of the Spirit (Chapter 2) part of the Lumiere London 2018 was a rare opportunity for me to combine three of my passions: Contemporary Art, Gothic Architecture and Black History.

Patrice's use of colour minded me of one my favourite contemporary artists Stephen  B. Whatley. Stephen has a distinctive individual, some might say idiosyncratic, colour palate of pastel greens, blues, pinks, reds and yellows which wash into each other in his oil paintings like water colours creating soft, muted edges between colour field forms in which he creates his images for example Victoria Harbour, Hong Kong. Patrice's colours are similar and images have those beautiful soft edges found in in Stephen's work.

He re-imagines the facia of Gothic Cathedral in light as it would have been originally - a riot of colour - not the dull, weathered monochrome we are left with today. The Cathedrals of the 12th, 13th and 14th centuries were built literally as heaven on earth made manifest in the lavish gilding and colouring; awesome splendour reinforcing the magnificence, the presence and power of God on Earth. Patrice re-creates for us that sense of awe felt by pilgrims as they approached and entered the church. The picture shows how Cathedral Basilica of Our Lady of Amiens in France might have looked originally, with its riots of colour just like the  Patrice's colour full West Door. 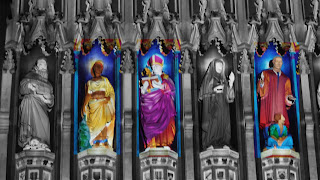 The Great West Door of Westminster Abbey celebrates modern martyrs of which not one but three are black.  Their statues are in niches two, three  and five reading from the left: Manche Masemola, Janani Luwum and Martin Luther King Jnr.

Niche Two Manche Masemola
Murdered by her parents for wanting to become a Christian.

Niche Three Janani Luwum
Archbishop Luwun was shot as stood up for his people in the face of the tyrant Idi Amin. 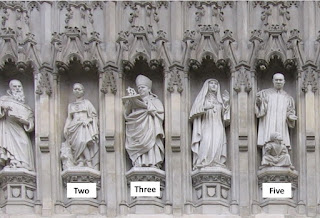 The BBC interactive game
Gives some idea of how Wells Cathedral might have looked.

There is good write up on colour in churches here