I was already to rant about the indulgence and self obsession that is Grayson Perry and his subjects  in his Channel 4's Who Are You ? To me this was Perry and his fellow self publicists on a self promotion trip. My Twitter correspondence on the program reflected my attitude: 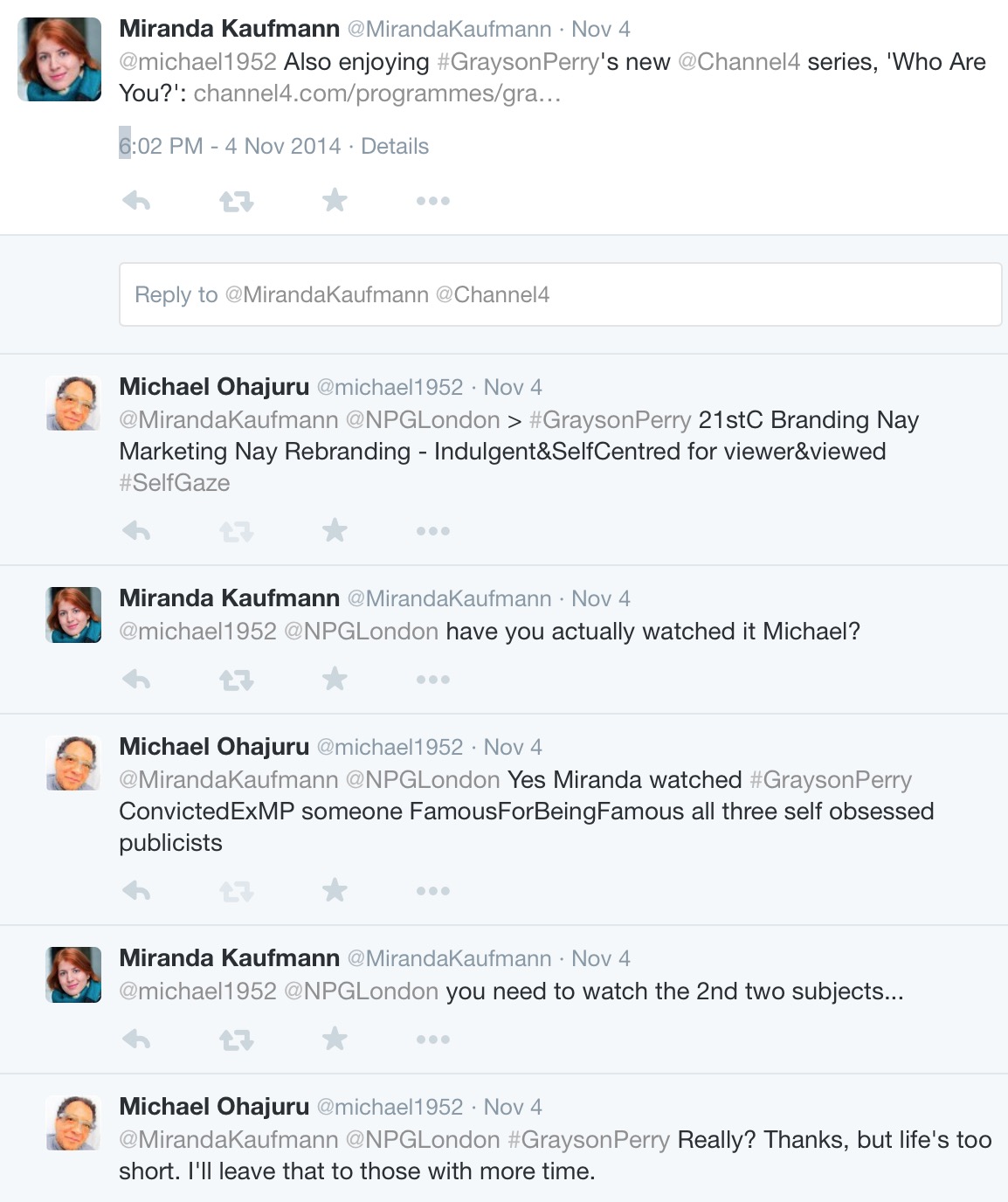 I’ve now seen the show at the National Portrait Gallery Who Are You? The installation or rather,  quote that  insert[ion]into the Gallery’s 19th and 20th century displays unquote, is simply brilliant quite extraordinary curation.

NPG’s curators have excelled themselves in creating 14 individual installations which confront, arrest and question the viewer.

Grayson has taken inspiration from throughout Art history to create his fourteen portraits for example:


My favourite was the £5 note inspired tapestry - Comfort Blanket - which Perry describes as  a portrait of Britain to wrap yourself up in, a giant banknote, things we love, and love to hate, what  attracted me to the work was its eloquent word picture of all that is Britain & Britishness namely the Archers, the Beeb, Fish & Chips and right upto to date with the inclusion of Steve McQueen - a tapestry version of Danny Boyle's Opening to the Olympics London 2012

What makes the NPG installation so good is that works within its collection are hung along side portraits of the traditional, conventional great & good. The positions can be quite revealing of Grayson’s portrait and the works that surrounds it, complimenting each other by adding new layers of meaning.

The Ashford Hijab, for example, depicts the Muslim convert Kayleigh Khosravi and her children on a path from that “temple of consumerism”, Ashford Designer Outlet Centre, to Mecca. Creating a revealing contrast with the refined portraits of the Britain's elite - aristocrats, war heroes and heroines,  authors , artists,playwrights - that surround her portrait.

The show is an exemplar of modern museum curation which has its roots in the TV programs that had a book alongside. No TV art series seems to be complete without that associated book – perhaps dating back to 1969 and Kenneth Clark’s Civilisation. What the curators at the National Portrait Gallery are doing, as those at the British Museum are doing, is to link their institution a more familiar media to thier target audiences: TV and Radio respectively.

In the case of NPG it’s Channel 4’s Who Are You? while the perhaps, the British Museum in a more cerebral mood has gone for Radio 4 with the incomparable Neil Macgregor’s Germany: Memories of a Nation.

I believe this intersection of media - TV & Radio - with museums is brilliant as the two compliment each other so well (when done properly as the case with the two examples). It creates a new space in one's mind to appreciate and reflect on the works adding many new layers of meaning leading to a better understanding of the exhibition or installation.

So, although I would say exactly of the same things as I said on Twitter about the self publicising Perry and his models, I cannot speak highly enough of how the NPG has presented the works - I fully recommended NPG installation!