It was with deep sadness I read of the passing of Jon Daniels on Facebook last week.

I first came across Jon at his exhibition for the Children's Museum which I wrote about on this blog. I was deeply impressed by his aesthetic vision and his love of the black presence in comic books. He combined the two in his wonderfully iconic Afro Supa heroes series. I’m proud of the Afro Supa badge on my hold all.

Jon used an individual, almost idiosyncratic colour palette in his designs - his pastel blues , yellows , green within clearly defined forms and shapes where distinctive , characteristic of Jon - his trademark. The redesign of the facia of  Brixton Advice Centre on Railton Road in Brixton was quintessential Jon - combining his design style with a cultural message - I had to record it for my blog. 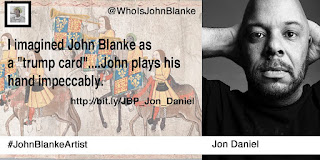 Jon made a lasting contribution to my John Blanke Project not just in his A4 , black and white, interpretation of John Blanke as the 'trump card' - one of the most distinctive but, also in his advice and guidance. I named the Project’s social media Twitter and Facebook accounts WhoIsJohnBlanke on advice from Jon as he saw the project as asking questions as to who really was John Blanke, this thought process led me to the Project’s strapline - Imagine the black Tudor trumpeter.

I’ll miss Jon, he had such a brilliant, creative mind who used his design ideas in the most inventive and original ways to communicate with us. I and the John Blanke Project are all the better for having met him. I will always miss him.