Despite having brought Tate's William Blake Newton T shirt and Doc Martens Blake's House of Death inspired shoes I didn't buy the exhibition's catalogue to Tate's vast, all embracing exposition of Blake's work, I'll come back to this matter. 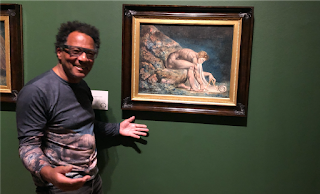 To celebrate my visit I was wearing two of my favourite works by him Newton and the House of Death so couldn't resist having my picture taken with both works along with the thought 'What would Blake think of me wearing his images?' I'd like to think he'd approved as was an innovator in art in his day so we wearing his work, spreading the word. 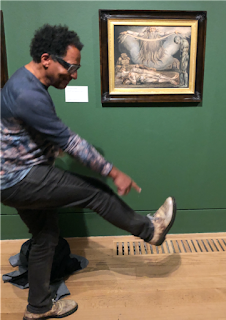 Blake's work was all here from his early works as a copying artist and engraver thru to his final works - illuminated drawings and engravings. So much to see. The exhibition was packed (3pm Friday afternoon) had to queue to see many of the works, joining a line shuffling past a linear display of his work. The speed of the line was dictated by time taken by those who required deep contemplative views of the works on display. This was not a serious issue as there was so much to see while one waited to reach your piece in the series.


Tyger Tyger, burning bright,
In the forests of the night;

Sadly they didn't have the pages I wanted to see on display, more of that later.

I didn't realise just how gifted he was as an artist, copier and engraver. His engraving of Hogarth's 1731 A Scene from the popular play ‘The Beggar’s Opera’ which I know from Tate Britain was wonderful.

He was probably paid about £53 for his beautiful commissioned engraving, according to its exhibition plaque. At the same time a tradesman or shopkeeper might have had an income of £80-150 a year and middle class professional earned £200-500 per year so depending on his productivity he might well have had a middle class professional income. His work was a wonderful rendition of the original but it raised a question....

I was struck by the question why didn't Hogarth, a good businessman and a master engraver himself, make an engraving of this picture of this popular play sixty years earlier ?

A paper by Marvin A. Carlson [1] argues Hogarth's reluctance to make an engraving of this painting can be found in the satire within the paintings such as the satyr, the lustfull drunken woodland god depicted above the Duke of Bolton, serving iconographically to suggest the satire of both the painting and the play portraying, and reinforcing the Duke of Bolton's lascivious attention on his, then lover, the white-gowned actress Lavinia Fenton playing Polly Peachum. The finger of the satyr's carelessly dropped hand clearly indicates the Duke as the source of his licentiousness. Such pointed satire would be much appreciated in a painting done for a particular patron, but it would have been dangerous in a widely distributed engraving while all the principals were alive and in positions of wealth and influence.

The work I would have loved to have seen on display but sadly wasn't was from Songs of Innocence The Little Black Boy  A christian poem - a dialog between a black mother and her son -  the words of the son speak of the hardship of being black 'But I am black as if bereav'd of light' and his mother's response encouraging him to endure and of love of God, the poem closes with the little boy speaking of the equality of black and white children before God. An anti-slavery poem written in 1787 twenty years before the slave trade was abolished.

As the page wasn't on display I went to the room in the upper level of the Turner Gallery which normally houses Blake's work including a version of The Little Black Boy page. Tate's page was not on display instead there was an excellent little exhibition to compliment The Blake Exhibition - Ancients and Moderns: Legacies of William Blake.  The display showed Blake's influence on British artists in the nineteenth and twentieth centuries, the display included works by Sammuel Palmer, Paul Nash and others tackling mystical and religious themes and ideas, but no Little Black Boy....

So I have created my own images....

In the three pages' images you can see his work as the engraver, hand finishing the engraving to create an individual, unique work not just simply a page of poetry but a beautiful work of art helping the reader understand and interpret poem.

I didn't buy the catalog or the book as I wanted to have The Black Boy set amongst Blake's work to show he was an engraver, an artist, a free thinking individual who believed in humanity, a visionary,  a man ahead of his time.

My take away was just how prolific Blake was -  his mind and hand roamed far and wide producing so many extraordinary images and ideas, many unfathomable, often idiosyncratic but all engaging to one degree or another  - brilliant exhibition, fully recommended!

......one last point I mentioned at the dinner after the last What's Happening in Black British History workshop that I was going to see Tate's William Blake exhibition I was  reminded that Jim Morrison's Doors was named after a work inspired by Blake -  Aludus Huxley's 'Doors of Perception' which takes its title from a phrase  from  Blakes 1793 poem The Marriage of Heaven and Hell....


If the doors of perception were cleansed every thing would appear to man as it is, Infinite.
For man has closed himself up, till he sees all things thro' narrow chinks of his cavern"