Learnt from Las Vegas, Applied in London and Liverpool 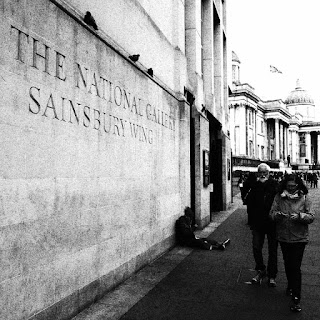 Preparing for my first Image of the Black in London Galleries tour I looked at how the postmodern influence behind  the Sainsbury Wing extension to the National Gallery was rooted in Robert Venturi’s 1972 influential work Learning From Las Vegas.


His radical ideas from consideration of the famous Las Vegas Strip with its iconic welcome sign gave way to a new way of thinking about urban architecture as he parodied modernism’s minimalism saying Less is a Bore! The Strip inspired him as buildings made their function and presence known through extravagant individual signage on its buildings.

Where modernism was about space Venturi argued postmodernism was about communication. A Mies van der Rohe modernist building had an intrinsic indifference to its history and location, it could be in any urban space, leading to the modern city having a uniform look and feel regardless of location from London to Los Angeles (or Liverpool).

Postmodernism was about context with its buildings fitting in a fun, idiosyncratic way within the settings they found themselves, letting the world know who they are. A postmodernist building fits within its environment. With its name etched into the front and the back of the Sainsbury Wing leave the viewer in on doubt what the building is.

The Sainsbury Wing's eponymous lettering minded me of the lettering I'd seen in the entrance to the British Libaray and of  a newly built care centre in  my home town Liverpool which I'd often stopped to admire.
To conclude, from prestigious public buildings exemplified by National Gallery's Sainsbury Wing extension and  The British Library  in London to the functional local buildings like the Health Centre in Liverpool Robert Venturi's Learnings From Las Vegas have been applied. The idea he first highlighted in 1960s Las Vegas urban development finds a place in the buildings of the 21st century from Las Vegas to London to  Liverpool.

BTW THREE The black presence in the Venturi's Sainsbury Wing is to be found in its faux Egyptian columns which parody the classical Corinthian columns and pilasters and remans us of the African influence on the western canonical art to be found in the Sainsbury Wing. A controversial debate intuited with Dr Martin Bernals' Black Athena hypothesis.