I am a big fan of Stanley Spencer (1891-1959) the visionary, multi faceted  English artist , so much so I help out as a volunteer or custodian as we are called at his eponymous Gallery in Cookham, Berkshire, England.

Spencer’s popularity has increased in recent years reflected in the fact, his Neighbours 1936 was voted one of Britain’s favourite works of art  in the Art Everywhere project.

So the public and I had the chance to see Neighours on billboards all over the country.


I was lucky enough to find Neighbours twice on a trip into London last night: 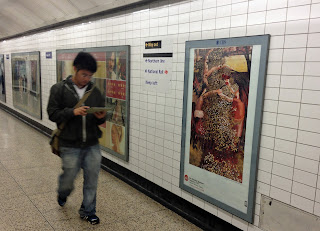 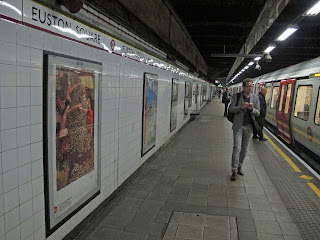 At the end of the platform of Euston Square Tube Station

ArtEverywhere is a brilliant idea - putting great works of art voted for by the public on billboards all over the country. The 50 works which made the short list  range from the abstract of Bridget Riley's Blaze 4 to the historical figurative of John William Waterhouse's The Lady of Shallot , demonstrating how popular Art is in general and Spencer in particular.
Posted by Michael at 00:05