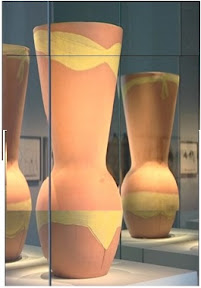 Bikini, Feb 27 1961
Gagosian Gallery's PICASSO: The Mediterranean Years (1945-1962) is a wonderfully and thoughtfully curated exhibition which vividly shows what a prolific, prodigious and catholic genius Picasso was - from his delicate small three dimensional origami like paper and cardboard works presented by the Gallery in conventional glass cases to a painted door presented complete with its hinges and doorstep screwed to the wall, as if waiting to be opened. Gagosian's exhibition shows Picasso's genius for consuming and transforming a huge range of media - pen and ink, tiles and bricks, bronze , wood, cardboard and paper.

The exhibition is well described elsewhere for example here and here.

This review will focus on two works and a curatorial scheme/installation that caught my eye as examples of how good this exhibition really is. Regrettably security was too tight to take any pictures –men in dark suits some with the classic CIA ear piece connecting them to some unseen central control were everywhere I looked – three or four per room.

But my lack of pictures is made up by the excellent Gagsocian web site supporting the exhibition which has a good selection of pictures of exhibited works and an excellent video which thoughtfully walks you through the show.

Eleven 29 by 41 cm Lithographs of a lone Bull framed in black and hung in a single horizontal row at (my!) eye level .

Taken as a group the eleven Bull Lithographs are a tour through Art History of the nineteenth and early twentieth centuries.

Realism of the mid nineteenth represented by the first lithographs of a fully-formed, massive Bull giving way to late nineteenth century’s Impressionism with the Bull drawn quickly with Impressionism’s fast, light pen strokes capturing the moment as the Bull tail swirls.

There follows Cubism’s faceted planes – early twentieth century - which are used to deconstruct the Bull’s substantial form which Picasso progressively breaks down from planes into lines – from three to two dimensions.

By the final lithograph on this Art Historical journey, Picasso's Bull has lost its mass entirely. The Bull is reduced to a few pen strokes his huge , powerful head has been précised to a pinhead, his magnificently rendered horns mere sticks in stark contrast to Realism’s Bull with its massive head and menacing horns. Picasso is in total control of the journey from Realism to the edge of Abstract – Brilliant!

Bikini is the first piece that one encounters on entering the exhibition - it made me smile!

It is Picasso at his most playful and mischievous. He takes an essentially innocent object – an unglazed terracotta vase about one meter high –and with a couple of judiciously, incised lines and few splashes of yellow paint he creates the torso of a slim-waisted female putting me in mind of the Venus de Milo .

Bikini is on a small plinth behind glass with mirror on three sides giving a full and explicit view of the entire work in the round. What I found so convincing were the lines creating the back bone and the buttocks. Picasso translates a two dimensional line drawing into three dimensions - maintaining the elegant simplicity of the drawing.

I was also minded of one of my favourite and wittiest works by Picasso – Still Life with Pitcher and Apples, 1919. Here he places a jug on a table with two apples either side of it with a further two apples on plate positioned top of the jug. Innocent enough? On the on hand yes – this is a low, dimly lit; compressed and flattened picture space painted with a muted palette of greys, yellows and greens. On the other hand the painting – like Bikini – can be read as play on the female torso: the apples as breasts the buttocks as the body of the jug. Pitchers and Apples sexual inference is more subtle than that found in Bikini nevertheless they both show Picasso’s wit as well as his genius for helping us to re-examine our world around us

There is a dimly lit passage about seven meters long linking one exhibition space to another whose walls are made of glass. Behind the glass walls are spot lit plinths upon which are mounted some works in wood and bronze. It is the bronze works which are this most eye catching through the spot-lighting.

The installation seems to be a homage to the Royal Academy’s controversial 1995 exhibition Africa: The Art of an Continent , with its darkened rooms and spot light objects which some at the time had argued the exhibition had late nineteenth century notions of the ‘dark continent’ . The installation presents Picasso’s work like those of the Royal Academy’s Africa exhibition and the same presentation can be found today in the British Museum’s Africa Galleries. The Gagosian installation clearly makes manifest the influence of Africa on Picasso’s art.

This is a superb exhibition, its range and depth is stupendous showing Picasso as the genius whose shadow was cast over virtually all art of the twentieth century leaving no media or form untouched by the incredible brilliance of Picasso's eye, hand and mind – Gagosian Gallery's PICASSO: The Mediterranean Years (1945-1962) recommended without reservation.